PowerCLI Core on Mac or Linux made easy, with help!

With the much-heralded release of Microsoft’s PowerShell, VMware’s PowerCLI Core in fling format was released on October 17th. This allows users of Mac and Linux to run PowerShell just like on Windows. While PowerCLI can be installed with instructions on the fling website, VMware also released a Docker container with the same. Containers are all the rage right now, and we at Sovereign are all over this technology to determine how to best leverage it for our customers, so in this blog post I’m going to illustrate how to get started with both Docker and PowerCLI Core.

To begin with, let’s set some expectations straight. Docker and containers is a large and complex subject that deserves far more than a couple pages of prose can deliver. There are plenty of places to go that will help set you on the right path with containers, so I won’t attempt to usurp those efforts, but I will show how to go from zero to PowerCLI Core in a container. Let’s waste no time in getting started.

First, let’s assume we’re using a Mac here and we want to get started with PowerCLI Core. We need Docker to do that, so head over to the Docker for Mac page and download the DMG file. Do note that this version of Docker does require Mac OS X 10.10.3 or above. The previous way of running Docker on Mac entailed using the Docker Toolbox. These are essentially two different “products” and the use of Docker for Mac is preferred if you have at least 10.10.3. I won’t cover how to migrate from one to the other, as that is covered in the Docker docs. Anyhow, once you’ve installed Docker for Mac, you should get a neat new Docker icon in the upper-right-hand corner of your screen. 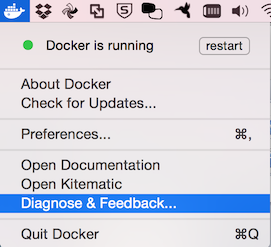 Once you have this, you should be able to start using Docker. Again, I’m cutting out a bunch of the technical fluff in how this technology works, but you can read for yourself how this is enabled in the docs above. If Docker is installed and running, the next step is to open a terminal and see if you can get a response from your Docker daemon. Run a docker version and see if you get a response. You should see the following (at the time of this writing):

This response indicates the version of the server and client components, which is 1.12.1 in both cases. If you get that, great, you’re ready to continue; if you don’t, stop here and backtrack because something is wrong.

So you have Docker up and running, and you can run a docker command to see the result. The next step is to pull the PowerCLI Core image. To do that, we issue docker pull vmware/powerclicore. This will download the PowerCLI Core container from the Docker Hub, basically the app store of containers.

Now that we’ve pulled the Docker container, let’s do a docker images to make sure the image is local, and to see other information regarding it.

Once done, we should now be able to run that container. Let’s do so with:

Do mind the wordwrapping here as this is all a single command. Let’s step through this command piece by piece.

In any case, this command tells Docker to run the vmware/powerclicore image as a container, fire-up PowerShell, and give us a familiar CLI so we can start using it. If all that was successful, you should see this:

If you do not see this, then backtrack and figure out what went wrong. But otherwise, we should be greeted by a nice and shiny command prompt waiting to accept our every PowerCLI desires!

Well, looks like it doesn’t like my self-signed certificate in the lab. Let’s override that so we can connect. Don’t remember the parameter to pass to Connect-VIServer? Don’t worry; I don’t either from time to time. Fortunately, that’s where the nice Get-Help cmdlet comes in, or as it’s known by its alias, just “help”.

Struck out again. We can’t even display the help documentation because the “less” utility isn’t available somehow. We’ll come back to this in a moment.

In so doing, we should now be able to run those cmdlets we so love and adore. We’ll still need to Connect-VIServer, but that’s no big deal. Pass it credentials and you should be on your way. Run a simple Get-VM to make sure we’re good.

Looks like we are, so now we can use PowerCLI on Mac just like we could on Windows. Hooray!

One problem remains. We can’t access the help pages that we really need. Yes, sure, we can pull up the on-line help, but using the help cmdlet is so much easier because it delivers knowledge within PowerShell at the time we need it. Clearly, we must have a solution. If you refer back up the page, the error message we got was due to lack of the “less” utility. Why is that? Well, images in Docker are built from a manifest known as a Dockerfile. It just so happens this file is also available to us in the container. Let’s do a “dir” command to see what’s in this location.

Forgive the blurriness here, but I wanted to maintain the formatting to make it easier on the eyes. Ok, so here we can see the Dockerfile. Let’s do a common cat on it to view its contents.

Ok, so we have a bunch of information here. The main things to point out are at the top. The base layer is FROM ubuntu:14.04, meaning the image beings with Ubuntu version 14.04. The RUN commands show which commands get run in composing the image. We’re installing a bunch of packages with the Ubuntu package manger, apt-get, in this case, and less isn’t among them. Let’s get less and see if that works.

No dice. Can we even run apt-get?

Nope, we can’t. What if we get a bash shell?

What distro is this anyway, even if we started with the Ubuntu base layer?

Ah, so we’re based on Photon 1.0 here. In Photon, we don’t use yum or apt-get, but instead tdnf. Let’s see what package we need to get less in Photon.

So we need the standard less package, not a package containing it. We can go ahead and install that with a tdnf install -y less. If you have Internet access, we should be able to pull down less from the public Photon repos. Let’s test that out and do a help on a familiar cmdlet to make sure the documentation shows up. To get back to a PS prompt, type exit to end the bash session, and press Enter to bring back the PS session we just left off.

Grand! We now have not only

When we’re done with this PowerCLI session, we can simply type exit and our container will exit. Need that PowerCLI session again? Do a docker ps –a to show all containers, stopped or otherwise, and get the contain ID or name.

And now we’re back to our PowerCLI session, so go fourth and PowerShell the masses with PowerCLI Core in a Docker container!